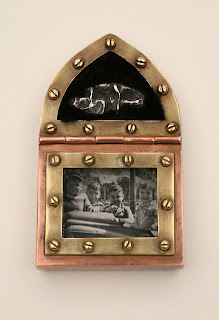 What is it about people and cars? I've been looking through a lot of old family photos and there is a whole category of people photographed with cars.
Above is an image of me from around 1957 sitting in a toy car posing with neighborhood kids.
I'm glad I enshrined this photo in a box I made in 1974, because I lost the original print. 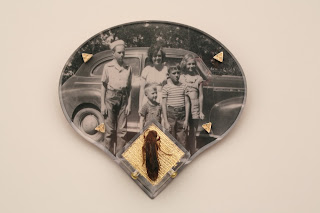 Whatever the reason for this popular genre, it is very useful for dating a photo. Above is an image of my mom, and her sister and brother standing in front of a car captured in a brooch we made in 2012. I'm guessing this photo was taken in 1946 or 1947 as my mom looks about 12 or 13 and the car looks like the late 1930's or maybe 1940. 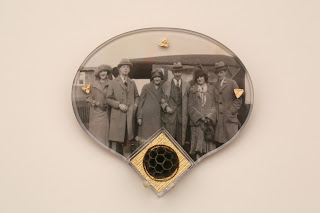 I don't know the people in the photo above but they were old friends of my grandmothers'.
I can date it to the late 1920s from the clothes and the car. 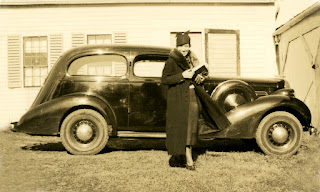 Here is a picture of my grandmother Alice Clement Worden, standing in front of a Buick from about 1939. She would have been about 40 years old. Grandpa switched to Fords in the 1960s. 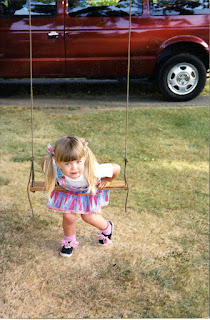 This is Alice's great grandaughter Avery Reed at age 3 in front of my first Dodge caravan that I bought new in 1991. For the sake of family history, please take some photos with cars this summer and don't forget to PRINT them out on paper.


Posted by Nancy Worden at 1:11 PM No comments:

Memorial Day came and went while most of us enjoyed our 3-day vacation doing chores around the house or kicking back with friends and family. In April my friend Mary Ann and I were in Washington DC touring the memorials there. At the Vietnam War Memorial we listened to a volunteer veteran explain the notations after the names and watched him help people take a rubbing from the wall. The Lincoln Memorial was very crowded with people from all over the world. The new Martin Luther King Memorial is quite grand and the word monolithic came to mind.  This larger-than-life full-length portrait of King is carved from stone reminiscent of Mount Rushmore or Stone Mountain in Georgia. He is looking towards the water and the Jefferson Memorial, surrounded by a wall carved with quotes from his speeches. 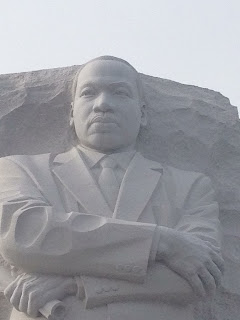 The one that was the most poignant for us, however, was the new Korean War Memorial. The day we were there, a Sunday, we ran into a large group of older veterans, called Honor Flight from Montana, making the rounds. Many of the vets were in wheelchairs and one Korean War veteran was telling the story of landing on the beach in Korea the same day as Gen. MacArthur. A female representative of the VFW recorded his oral history as he talked and asked him questions.  I was absorbed in his story and keeping it together until I turned and saw a group of Koreans leaving a wreath and wiping their eyes and then I shed a few tears myself. Mary Ann took these pictures as mementos of that day. 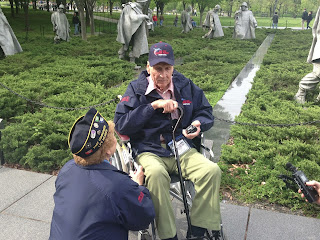 Korean War Veteran with figures of the Korean War Memorial in the background.
http://www.koreanwarvetsmemorial.org


A memento is an object made or saved to remember a person or an event by and it can be a piece of jewelry. Queen Victoria is frequently credited for starting a fad for mourning jewelry. Her reign from 1837-1901 coincided with the development of photography and mass produced jewelry making it possible for ordinary people to own a photograph or a locket.  She loved jewelry and when her husband Albert died, she went into mourning wearing black clothes, black stones and jewelry made from his hair for the rest of her life.  You can still find Victorian hair jewelry in antique stores today though not all of it is about death. People exchanged locks of hair for many reasons including friendship and betrothal. 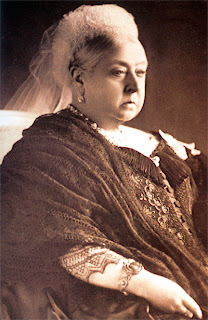 I have integrated hair in my work off and on for many years. A brooch I made in the early 1990s intended as an amusing comment on hairdressers has inadvertently become mourning jewelry for me as it contains a lock of my sister's hair. Hair doesn't rot and preserves the DNA of the person it came from. 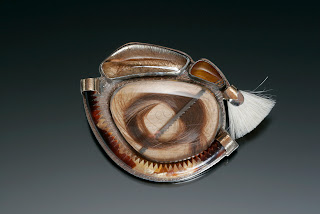