This morning as I was looking at images of the storm on the east coast, I thought of the Statue of Liberty, my favorite American sculpture. Two weeks ago my friend Mary Ann and I were in NYC and went out to see her. In 1987 I climbed all the way up into her crown for the fee of $1.00. Because I am a metalsmith I am always blown away by how she was constructed. The sculpture, designed by French artist Frederic-Auguste Bartholdi, was hammered out of solid copper sheets by French craftsmen. The giant sheets are riveted together and hung from steel springs that are attached to the iron infrastructure designed by Eiffel, one of the best structural engineers who ever lived. In the two closeup images below you can see the individual giant copper plates on her arm and the bottom of her foot and even some of the copper rivets. 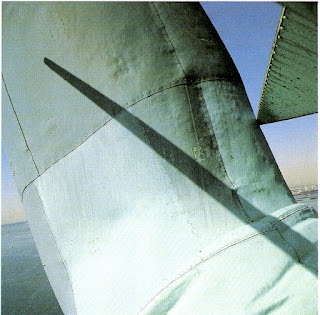 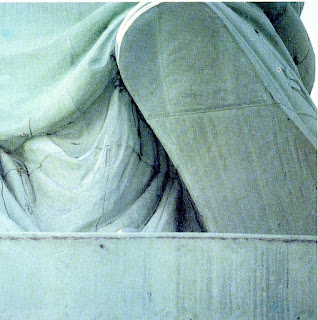 The photograph below was taken at the French workshop of Gaget, Gauthier et Cie, the craftsmen who actually made the colossal statue. Note the size of the torch compared to the men in the shop. 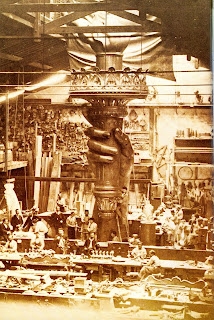 By the early 1980's Liberty was showing a lot of wear and tear so she was restored for her 100th anniversary by a combination of French and American craftsmen and engineers. Below is a photo from July 4, 1986 after the restoration was complete. The flame in the torch was completely remade and covered with pure gold leaf. 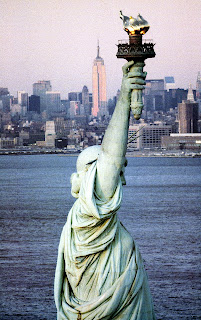 Liberty Island is a national park and they have a great souvenir shop. I bought the exact same thing I bought the last time I was there, a flashlight in the shape of Liberty's torch. It is the item on the right below. The object on the left is a horrible Chinese interpretation of her torch which I bought a few years ago from a costume supply shop. I bought it because I was teaching mold-making at the time and it was an excellent example of bad design, bad molding and a knock-off-on-steroids.  If you look closely you will see that the Chinese version says Made In China. It is a crude misunderstanding of a classic American icon. There is a political metaphor in there somewhere, but I'll let you figure it out. 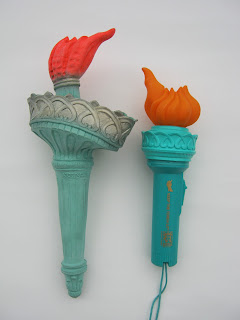 A Fancy Word For Stealing

A Fancy Word For Stealing

Recently I saw the movie, The Words. The movie addresses plagiarism, which is the word for appropriating or copying the work of another.  Plagiarism doesn't just happen in the arts, but it is considered a very serious offense for an artist or writer.  The practice of plagiarism is unfortunately common because it is a very difficult offense to prove. I know several artists who have been knocked off by another artist but the only artist I know of who had the resources to legally pursue an offender (a former employee) is Dale Chihuly. He took the offender to court and won.

A few years back one of my collectors called me and drew my attention to an image in a book of a piece of jewelry obviously influenced by my work.  In the late 1990s, I did a series of necklaces using small copper arms.  The arms were made by pulling a mold off of a plastic doll, casting the mold in wax and electro forming over the wax. One of my necklaces that used the little arms, below left, was published on the cover of American Craft Magazine, a periodical with a large, national readership.  For two months, the cropped image of my necklace was seen on thousands of magazine racks  around the country. The image on the right below shows the entire necklace entitled, Casting Pearls Before Swine. 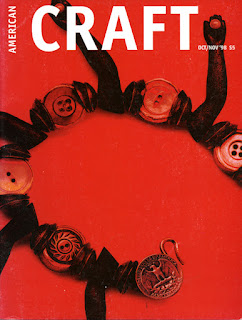 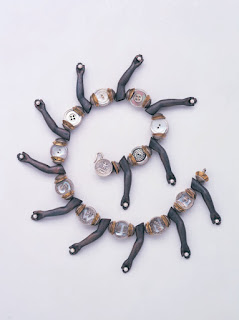 In all of the necklaces where I used the copper electro formed arms, the little hands were holding something and the necklace was inspired by a story. Below is the knock off neckpiece, using the exact same process, electro forming, and molded from the exact same doll entitled, Choked Offerings, by  someone named Carolina Cabellero.  Maybe Carolina was a student and didn't know better. My solution to the problem was to stop using the doll arm imagery. 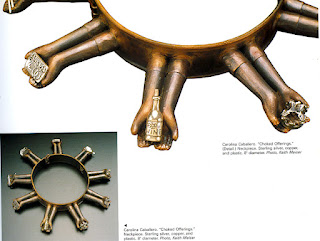 In The Words, the character played by Jeremy Irons hunts down the person who stole his book and confronts him. I got a lot of vicarious pleasure from watching the thief squirm.
Posted by Nancy Worden at 3:44 PM No comments: