Back in 1976 or 1977, I was walking through a bookstore in Yakima, Washington and stumbled on Native Funk and Flash: An Emerging Folk Art by Alexandra Jacopetti. It is a very unsophisticated celebration of home made fashion from an era when people embroidered imagery on their Levi's instead of tattooing their arms like they do now. I hung onto the book because it documented a time from my youth and it celebrated self-expression in a down home, folksy kind of way. 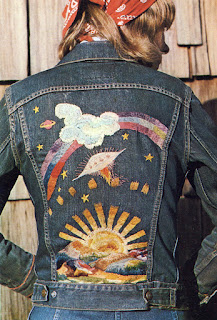 I was pleasantly surprised to re-discover the book at the heart of a current exhibition
showing at the Bellevue Arts Museum,

Counter-Couture is a celebration of the far out fashions from Native Funk & Flash, as well as clothes worn on stage by John Sebastian and Jimi Hendrix, big jewelry from that time and the influence of "hippie clothes" on the elite world of couture. 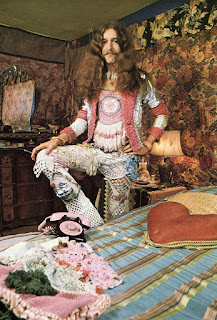 Scrumbly, wearing his suit made from crocheted dollies.

The guest curator, Michael Cepress, is a local clothing designer and an instructor at the University of Washington. He has developed a university course devoted to the history of style and fashion in the American counterculture of the 1960's and 1970's. He not only located some truly wonderful and amazing clothes for the exhibit he also interviewed many of the artists and learned their stories. 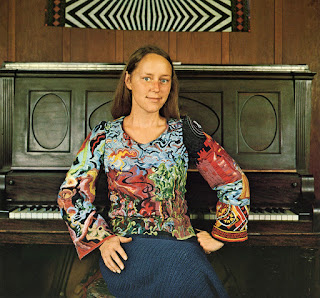 One of the more interesting stories is about Mary Ann Schildknecht, shown above. After traveling around Europe with her boyfriend, Mary Ann, then in her 20's, made the mistake of attempting to smuggle hashish onto a plane dressed like a hippie (red flag!) and was busted by Italian airport security. She was put in an Italian prison run by nuns and the nuns taught her how to embroider.
She spent 18 months at the prison and created a very intricate blouse and skirt embroidered on fabric she stole from her bedsheets. 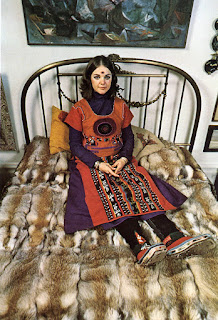 Another cool aspect of the book and show is the early work of artists who later became quite well known. Laurel Burch, who enjoyed enormous distribution of her designs in the 1980's and 1990's on tote bags, enameled jewelry, clothing and coffee cups, started out combining ethnic textiles to make interesting clothes for herself. 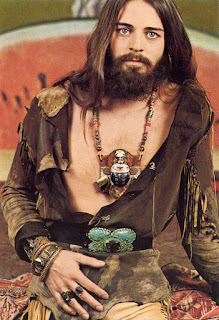 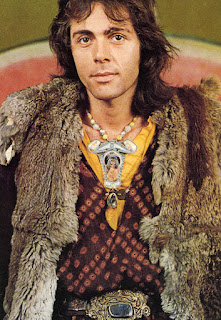 Alex and Lee, partners in life and work, made heavily encrusted jewelry that later was picked up by Saks and I. Magnin. I remember seeing their samples at apparel shows in the 80's.

Some of my favorite clothes in the show were created by Kasik Wong. His clothing is beautifully constructed, nothing funky about it, and could easily serve as theatrical costume. 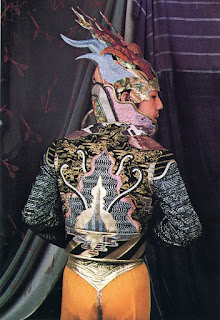 Kaisik Wong wearing one of his jackets and hat.

The show is up through January 10. On Saturdays and Sundays you will need to park and walk to the museum as the street in front of the building will be blocked for construction.
It's worth it, this is a fun show.
Posted by Nancy Worden at 3:14 PM No comments: