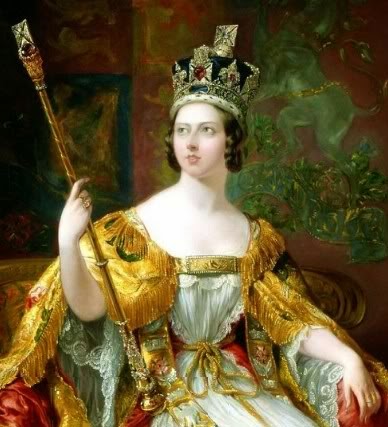 Victoria depicted on her coronation day wearing the Imperial Crown.

This winter I am reading the new biography about Queen Victoria by A.N.Wilson, Victoria: A Life. Queen Victoria ruled England from 1837 until 1901, became queen when she was only 18 years old, married her German cousin Albert at 21 and proceeded to have a lot of children. Besides her very long reign, she is known as the Grandmother of Europe as her 9 children and 42 grandchildren married into most of the royal families in Europe and Russia. She was unquestionably the most influential woman of her time. 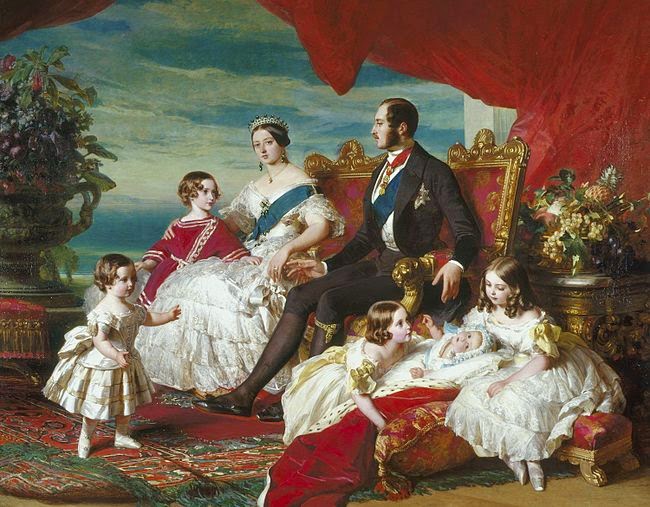 Family portrait of Victoria and Albert and 5 of their children by Franz Xaver Winterhalter.

Queen Victoria’s Coronation, wedding and early reign were recorded in paintings but photography quickly evolved in time to record her young, growing family and her personal tastes in body adornment. 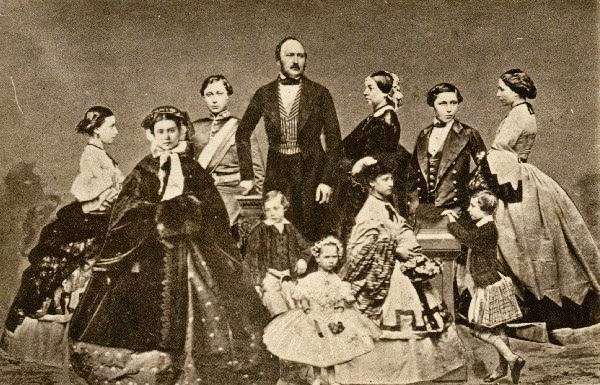 Early photograph of Queen Victoria, Prince Albert and all nine of their children.

Victoria was very fond of jewelry, wore a lot of it and set the fashion for what kind of jewelry was worn by everybody else. She was on the throne so long that jewelry fashions changed many times.

According to Victorian Jewelry: Unexplored Treasures. (available through Abbeville Press)“If only one category of Victorian jewelry could be used to define the feeling of the 19th century it would have to be the jewelry of sentiment. Sentimental jewelry was made from all sorts of materials, engineered in all sorts of ways, and inspired by all sorts of fashion influences. What unified it all was the use as its central image of the themes of love and remembrance.  It employed all the classic symbols: the heart, the outstretched hand, clasped hands, Angel, Cupid, the serpent and the endless knot.  It knew no social bounds because with the advent of industrial mechanization and less expensive materials, sentimental jewelry was with in the reach of just about everyone”. 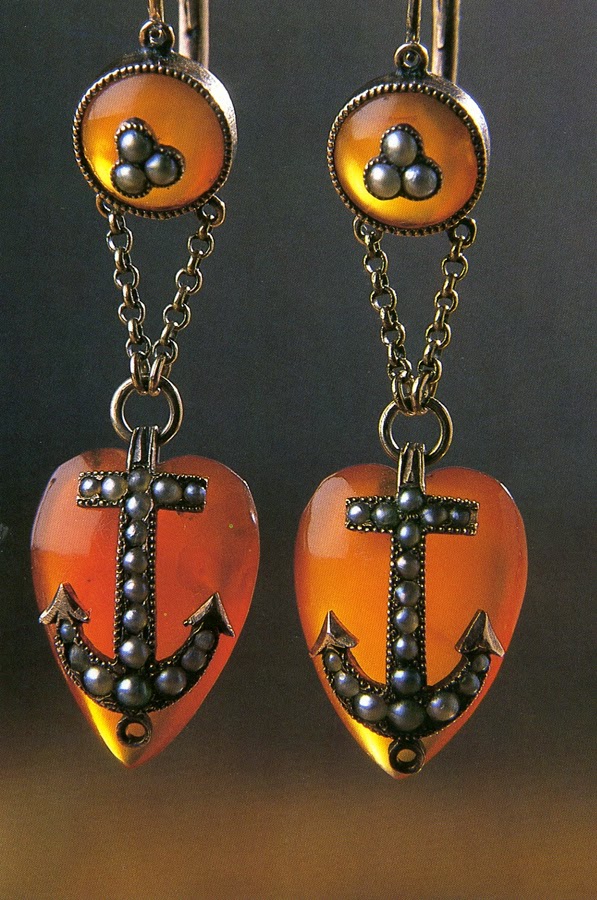 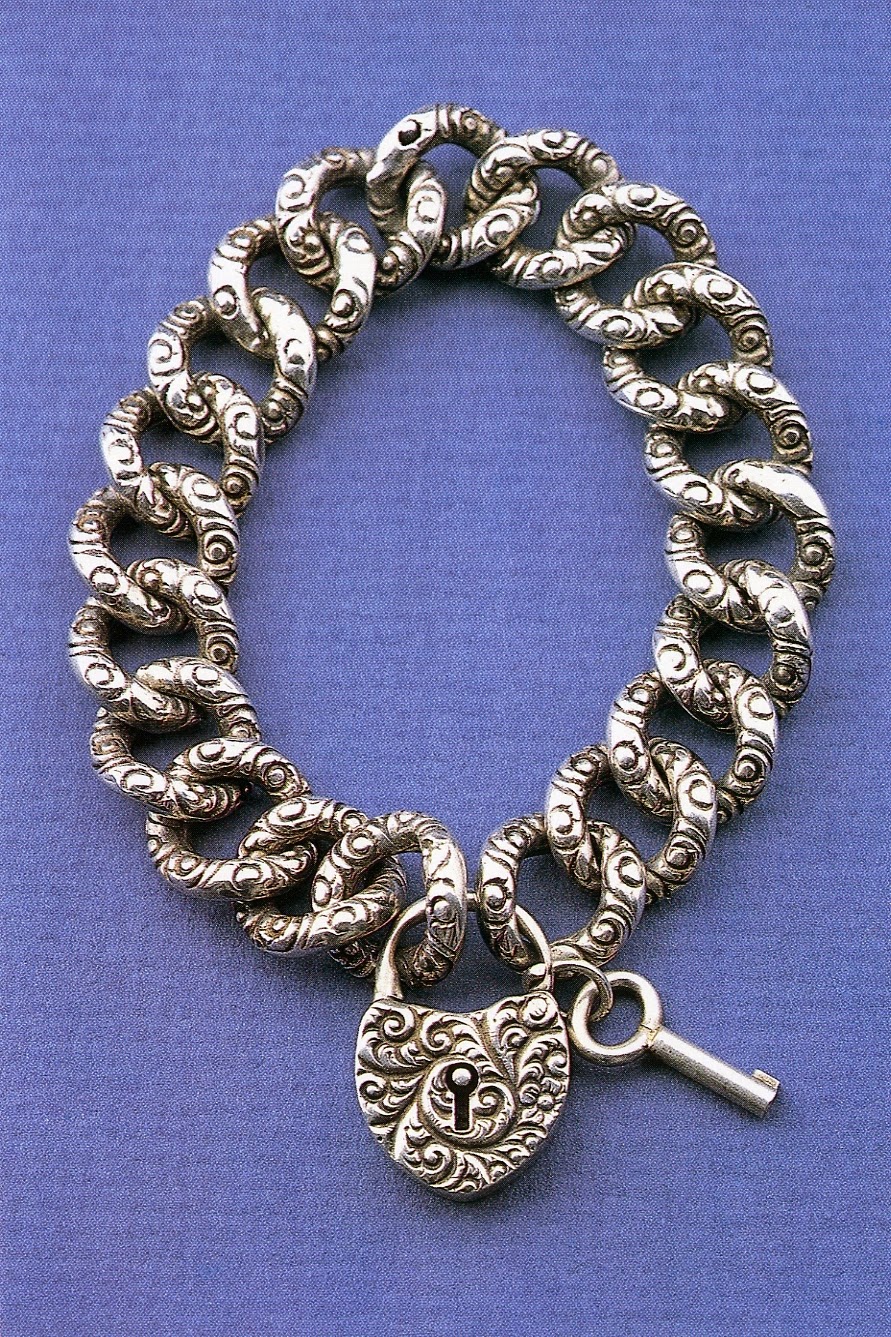 After Victoria purchased the Balmoral estate in 1847, she started a craze for everything Scottish. She dressed her children in Scottish Highlander costumes and had jewelry made from the local granite. As the fad for “Scottish pebble jewelry” spread, it became more and more colorful, downright gaudy and technically less Scottish. Eventually the bright-colored stones and agates came from all over Europe and much of the jewelry was made in England, not Scotland. 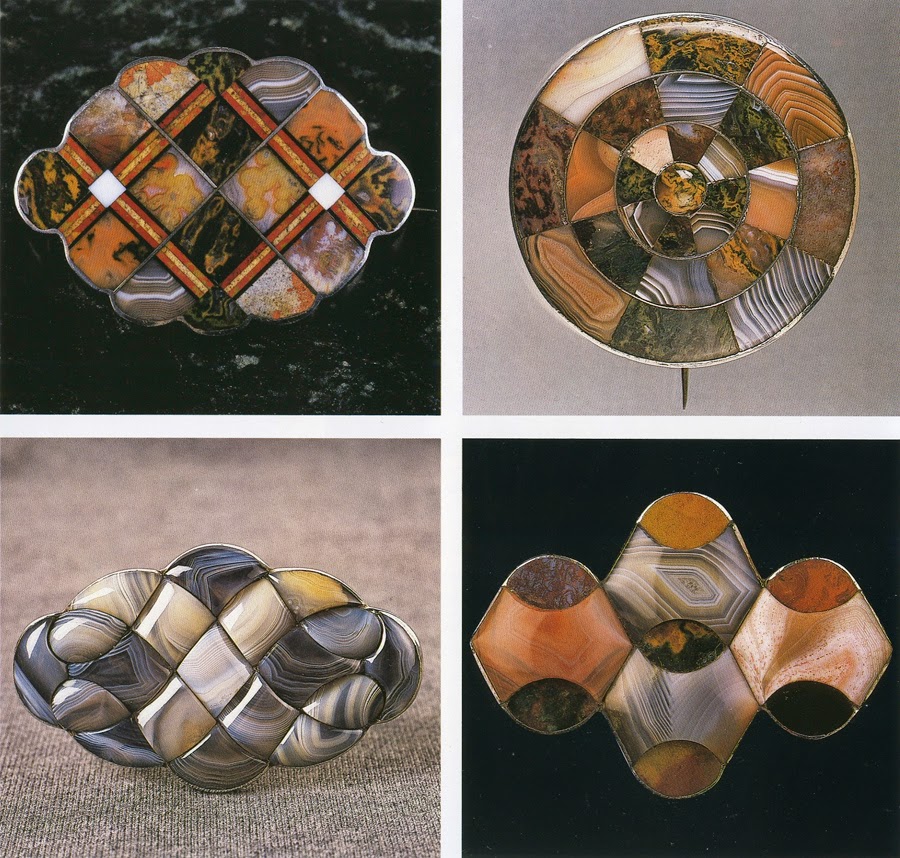 After Albert died in 1861, the queen withdrew for several years and only jewelry made of jet, a coal-like material, was allowed at court. Her faithful subjects followed suit with black jewelry made from jet or cheaper substitutes. 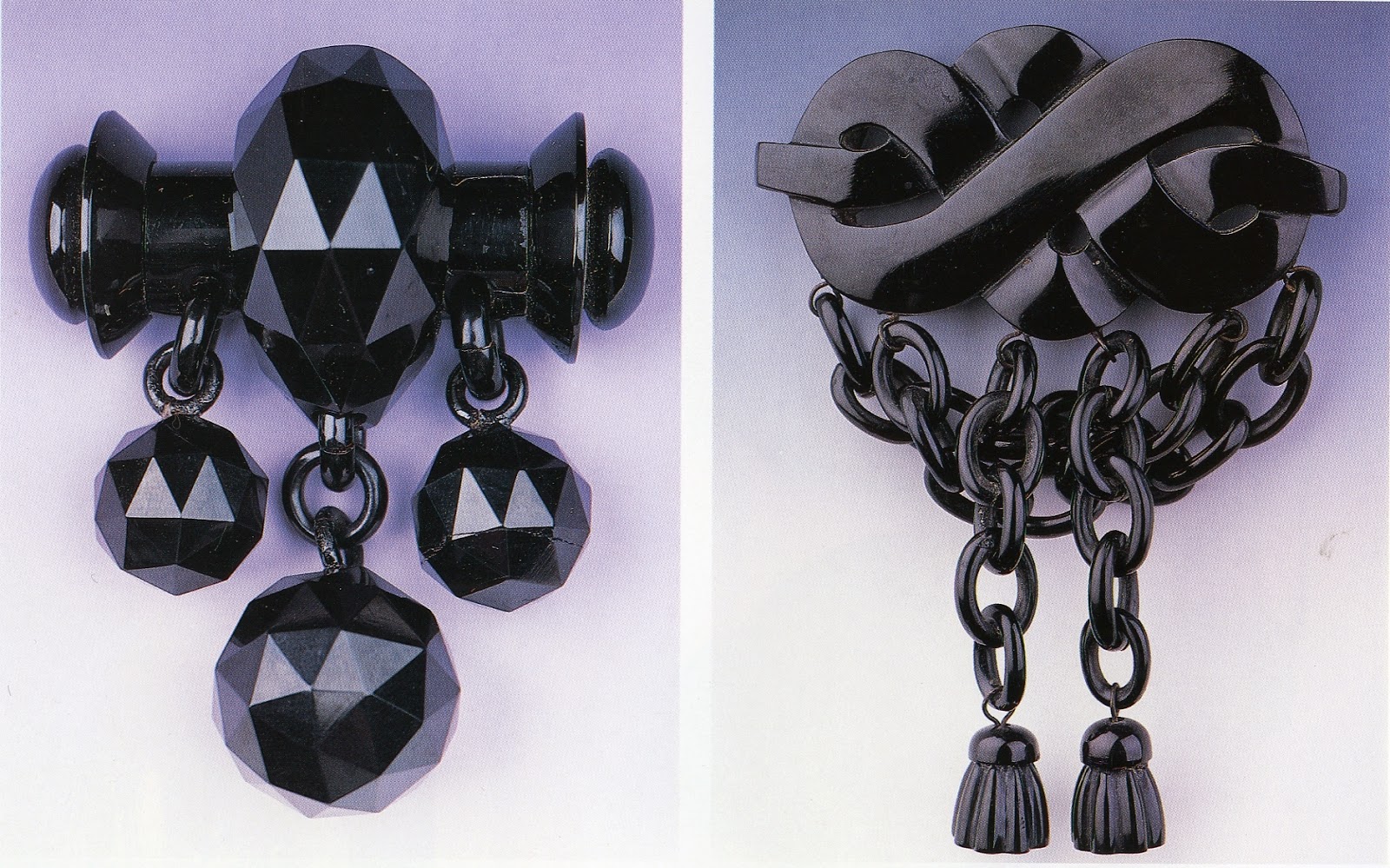 When she finally suspended her mourning, Victoria began to wear silver jewelry to celebrate her 50th anniversary in 1887, her Golden Jubilee. Silver jewelry had previously been distained by the upper classes because it tarnished, but when the queen began wearing it, everyone else did too.  She wore a widow’s veil for the rest of her life and with it a smaller, silver crown that was lighter than the Imperial Crown and designed to fit over her veil. 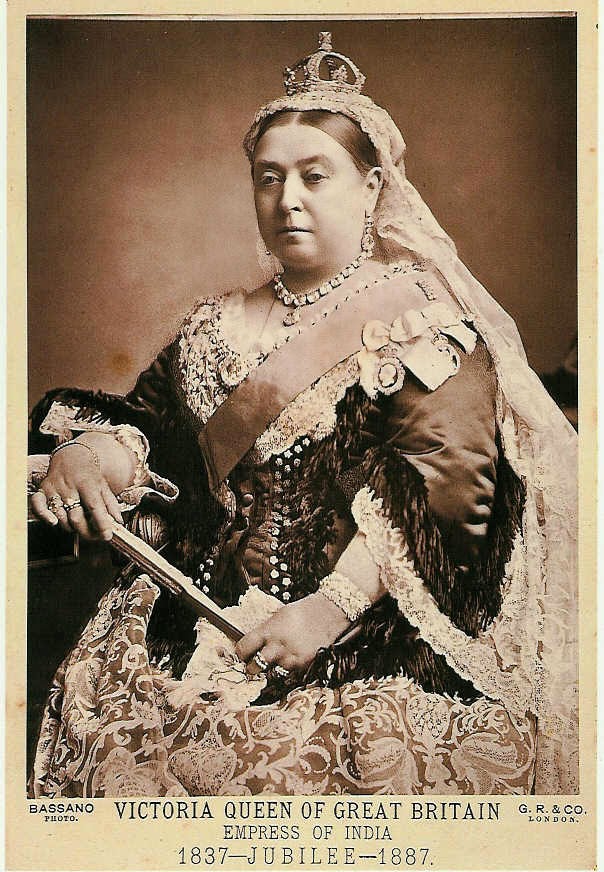 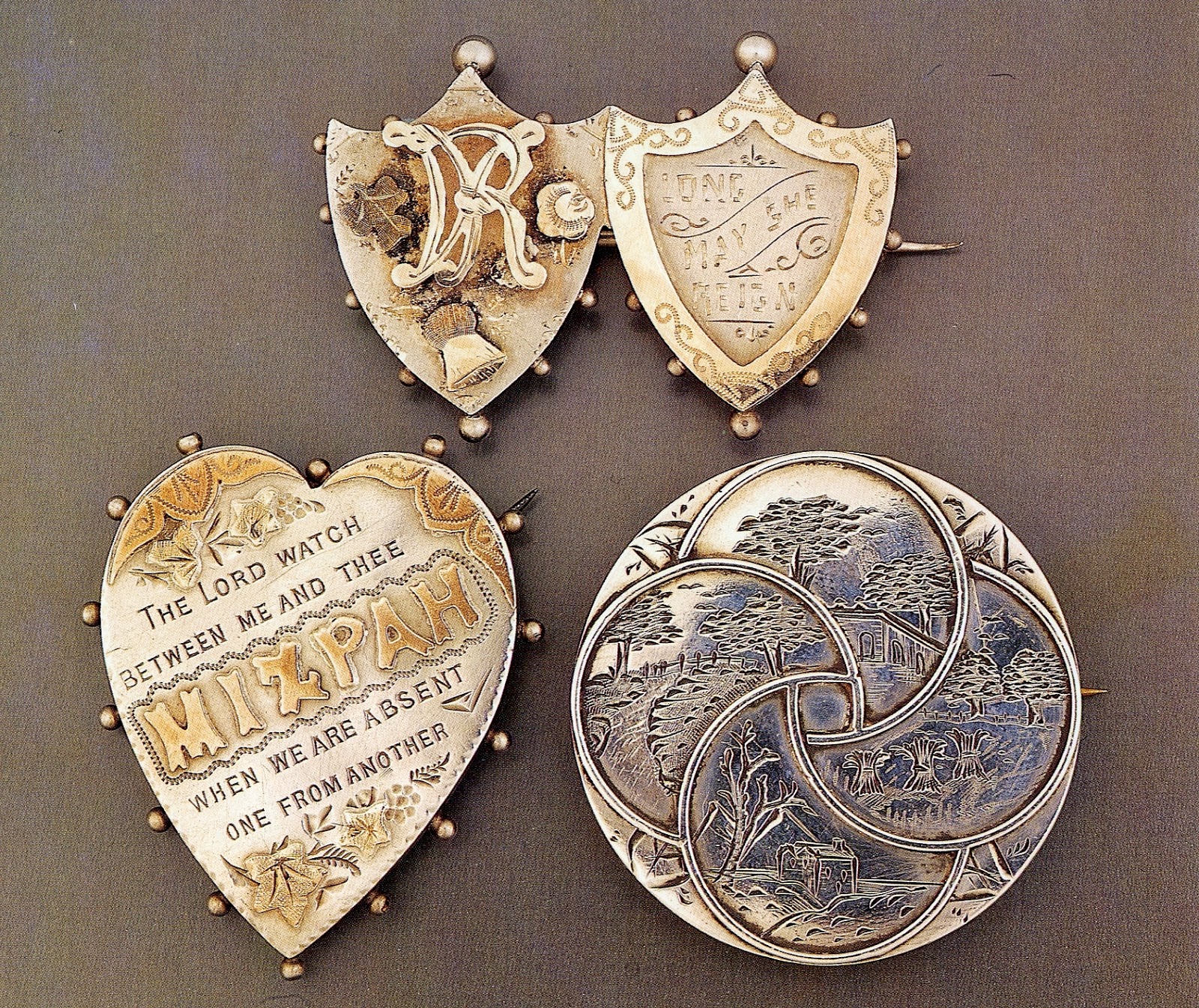 Queen Victoria lived 80 years and reigned longer than any other monarch in Britain, 63 years.  Her great-great granddaughter, Elizabeth II, will hopefully celebrate 63 years in June and maybe even surpass Victoria’s record. Both became Queen when they were very young and lived a very long time. 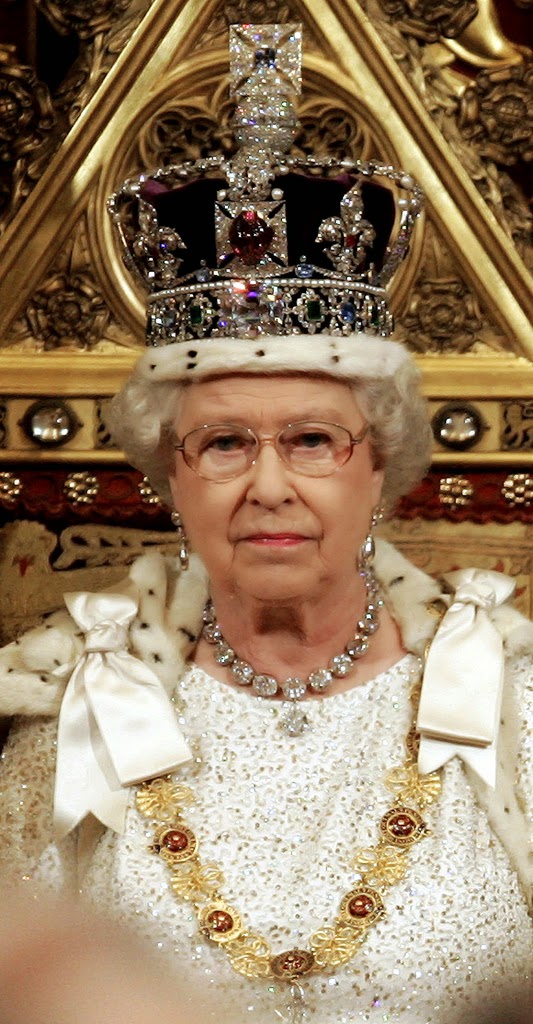 Elizabeth II wearing the Imperial Crown to Open Parliament. In this photo she is wearing the same diamond necklace Victoria wore in her 1887 Jubilee portrait.

Posted by Nancy Worden at 4:18 PM No comments: