I have just returned from a trip to our nation's capital and I had many experiences worth blogging about there, but the one that comes to mind today is the difference between how Washington DC and Seattle display art. While in the other Washington we went to the memorials and saw plenty of art at the different museums in the Smithsonian. However I can't recall seeing any public art on the street and certainly there was none to be seen at Dulles Airport. Dulles was renovated three years ago and everywhere you look there is glass and steel but no art. We did see a sculpture stand with a plastic box on top, but there was no art inside. Instead, there were wax models of the food that can be had at McDonald's on display.

This is sharp contrast to Seattle-Tacoma International Airport. There is art everywhere at SeaTac, on the walls, above the elevators, in the restrooms, on the ceilings, in the windows, and above the baggage carousels, I mean EVERYWHERE. It is as if Washington DC believes that art belongs in museums whereas in Seattle we believe art should be seen in museums AND everywhere else.

Here is the reason why. 40 years ago, in 1973, the city of Seattle and King County both adopted legislation creating the 1% for Art program where 1% of certain project costs are set aside to purchase and display art that visually enhances public facilities. In 1974, the state of Washington established the AIPP program to acquire artwork for K-12 public schools, colleges, universities, and state agencies, funded by one half of 1% of the states portion of construction costs. This is why we have art all over the city of Seattle, King County, and the State of Washington. If you Google on Dulles Airport you will not see art listed anywhere on that site. However, click on http://www.portseattle.org/Sea-Tac/Passenger-Services/Airport-Art/Pages/default.aspx, and you will see a link for a map of all the artwork at SeaTac Airport and there is A LOT of it. The Port of Seattle, who oversees the airport, actually started buying art in 1969 when the Port Commission voted to set aside $300,000 for permanent works. When the Port remodeled and expanded Concourses B, C, and D in 1990, 1% of the construction budget was set aside for art. The Port invested an additional $1.8 million in art with the opening of Concourse A and the expansion of the South terminal area. 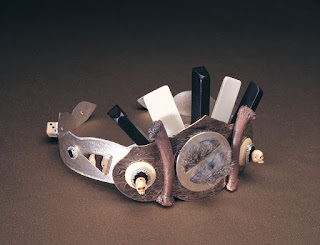 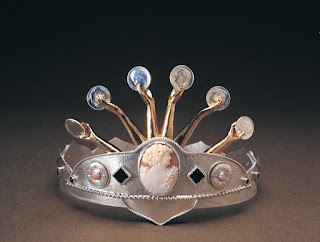 As an artist who creates work for the human body, I haven't applied for any commissions at the airport, but I have made one public art piece. In 1994 I was selected to create something for the City of Seattle Portable Art Collection.  I came up with, The Importance of Good Manners, a collection of tiaras celebrating different aspects of the culture of Seattle. The three tiaras celebrate philanthropy, hospitality, and political correctness. The crowns live in a beautiful gilded display case and travel around to different public buildings and offices in Seattle. Can you guess which is which?

So who chooses this stuff?  In 2008 I was asked by 4Culture, formerly known as the King County Arts Commission, to serve on a jury to select artwork for a new county employee office building and parking garage in Seattle. The jury was made up of me, two county employees who actually worked in the building, and a representative of the contractor who constructed the buildings. We went through more than a hundred applications over several days and weeks and finally agreed on two artists who would create the work. It was a difficult process and I learned a lot about how public art must integrate with the lives of real people. Similar committees were formed for all of the public art that we enjoy.

Next time you are visiting an airport, look to see if there is any art. My guess is that the ones that do have art also have legislation to finance it.
Posted by Nancy Worden at 4:53 PM No comments: