Why I celebrate the 4th of July

Recently I attended a movie at the Seattle International Film Festival.  The title of the movie was,
Ai Weiwei: Never Sorry.  It is a documentary about the Chinese artist Ai Weiwei.  Ai Weiwei  gained international acclaim while serving as a design consultant for the stadium built for the 2008 Olympics in China.  Since that time he has been making art and bringing the world's attention to what it is like to be an outspoken critic of the Chinese government.  After the horrible Sichuan earthquake in 2008, he became obsessed with documenting the names of the children who died in the flimsy school buildings.  The Chinese government continues to minimize and deny the scale of the death and damage there. For speaking out, his studio was destroyed and he has been beaten, imprisoned, censored and fined. 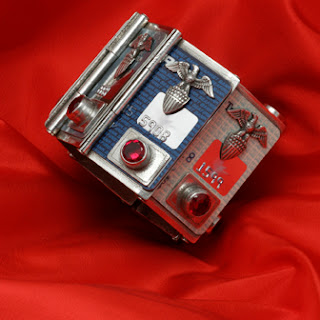 Above is an image of a bracelet I made in around 2000.  It is made of credit cards, synthetic rubies and sterling silver.  The title of the bracelet  is,"Path of the Eagle" and it is a commentary on the way  Americans are encouraged to accumulate debt.  It could also be interpreted as commentary on our national debt.  The reason I celebrate July 4th is because I am very aware that I am privileged to be an artist in a country where free speech is encouraged and valued.  That privilege was something I was born with but my ancestors had to fight for.  The story of Ai Weiwei  is a good example of why we must never take the First Amendment for granted. Have a happy and safe holiday, NW
Posted by Nancy Worden at 4:32 PM No comments: