Recently we completed a couple of jewelry makeovers. A jewelry makeover happens when a person tires of their original wedding ring or maybe inherits jewelry they don't like and they take it to their jeweler to make it over into something new. It happens a lot now, but the king of all jewelry makeovers was King Henry VIII of England (1491-1547). 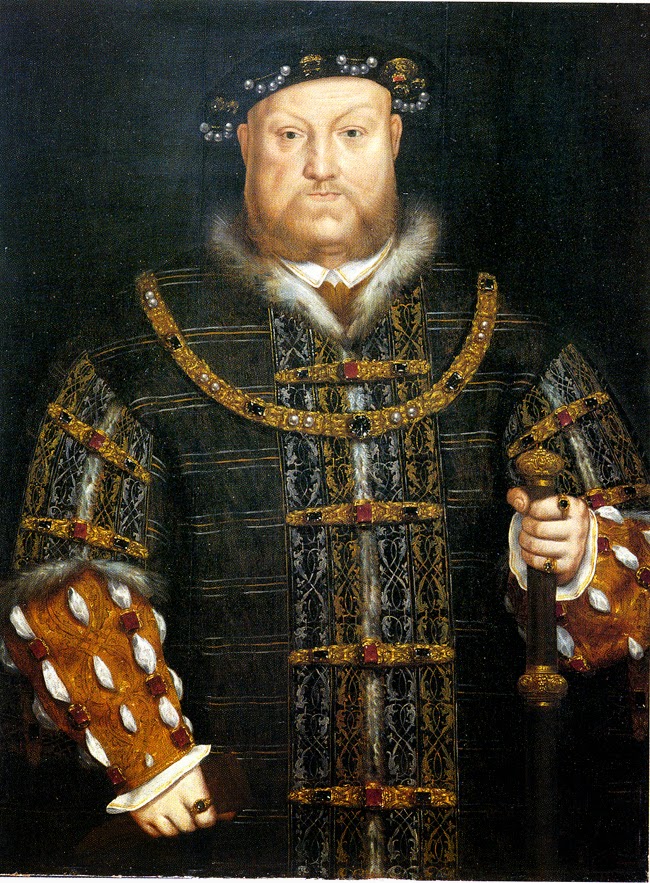 HenryVIII is always shown wearing lots of gold and gems: the years of his reign (1509-1547) were great times for the art of goldsmithing. He purchased jewelry constantly and according to an inventory taken in 1550, amassed the most sumptuous treasure ever possessed by an English monarch. After Henry quarreled with the Pope, he dissolved all the Catholic monasteries and appropriated all the gold, silver and gems in the church treasuries for himself. He went down in infamy not only for changing churches but also for frequently changing his wives. 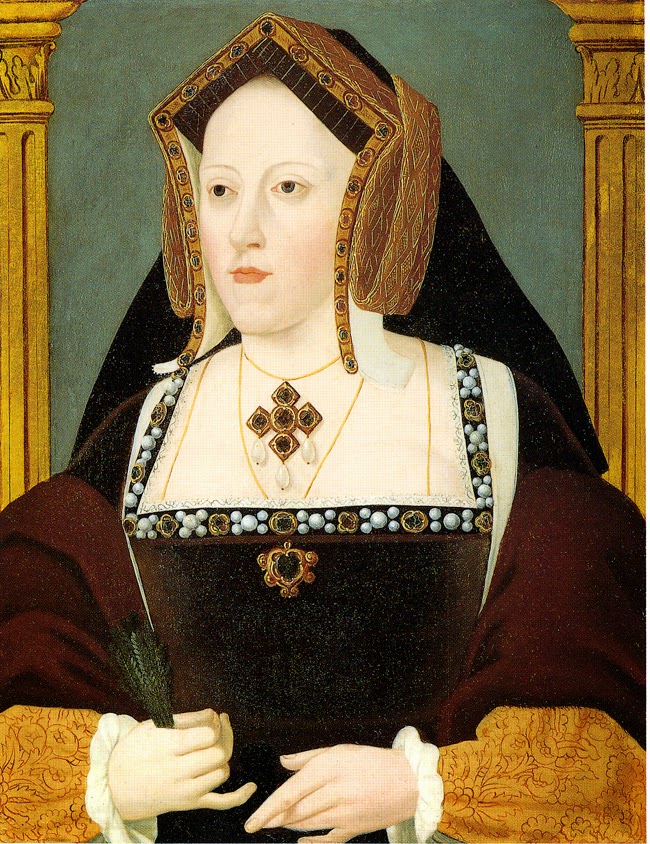 Henry VIII showered all of his wives with jewelry, often remounting the same gems from gifts to past wives for gifts to the new one. Their portraits are our best records of changing jewelry fashions during his reign. Henry gave his first wife, Catherine of Aragon, massive gems which she was made to return when he divorced her. At least she got to keep her head. Those gems were remounted in 1533 for her successor, Anne Boleyn. 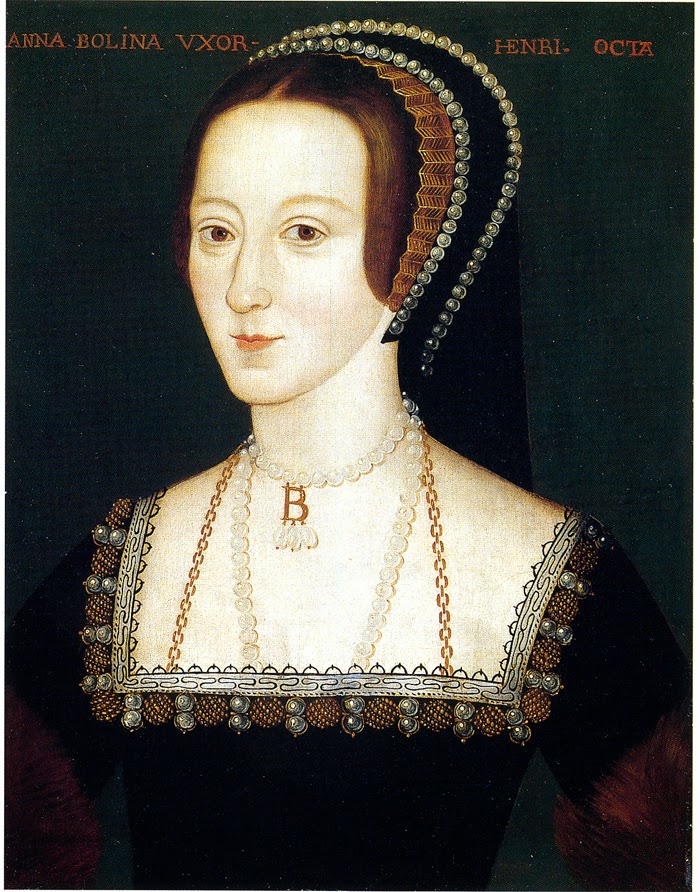 When Anne did not produce a male heir, she lost her head and her jewelry in 1536. Jane Seymour, wife number three, also received lavish jewelry, which was recycled back to the royal treasury when poor Jane died in childbirth. 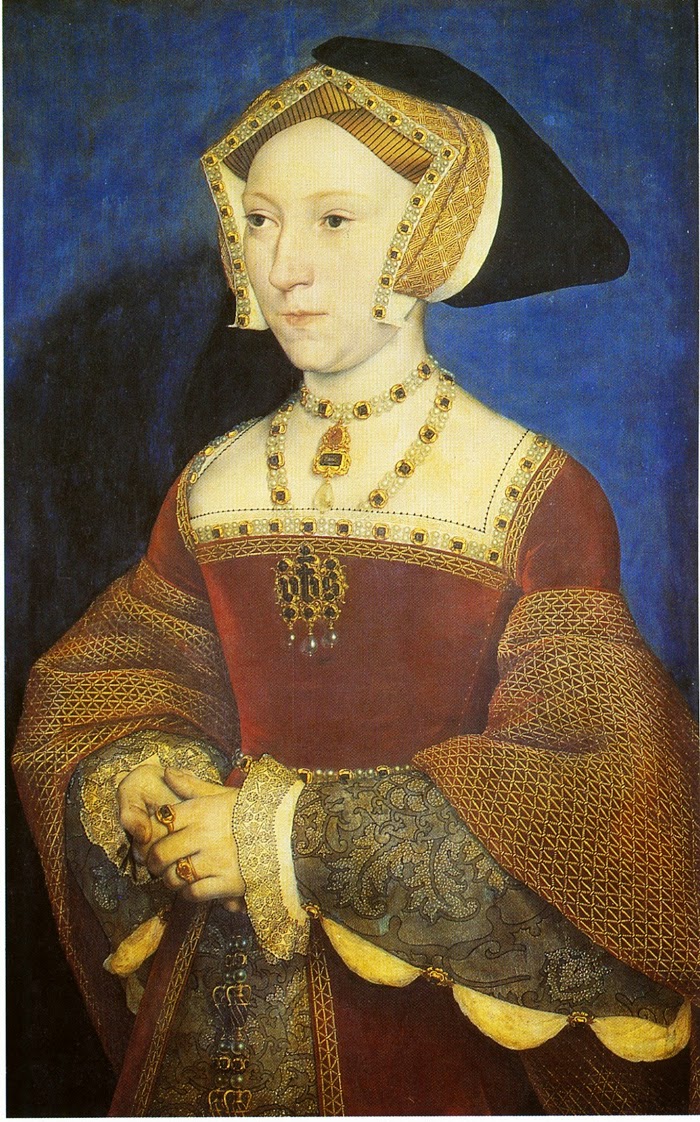 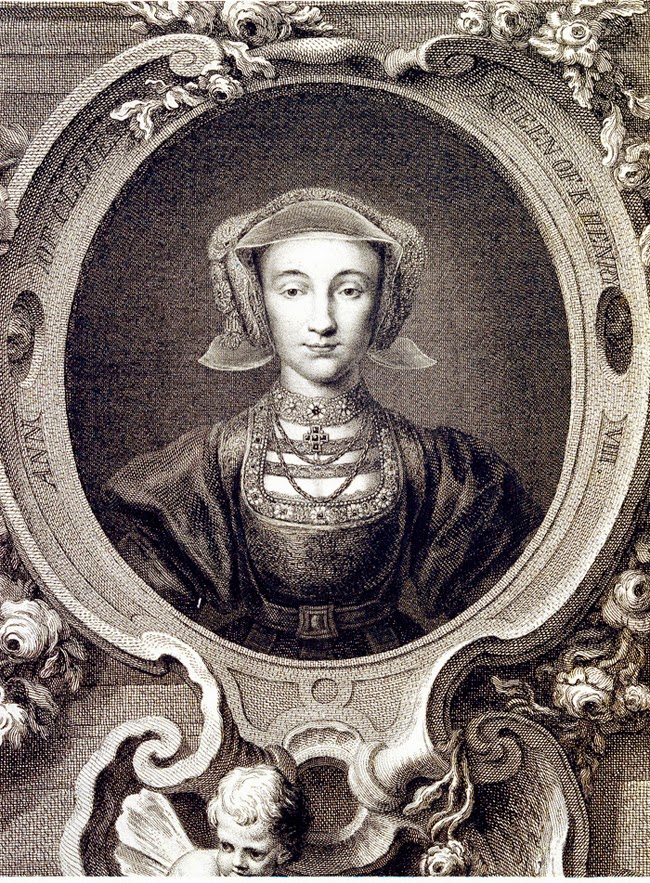 Wife number four, Anne of Cleves, was ditched almost immediately after her marriage in 1540, but she got to keep what little jewelry Henry gave her and left it to Henry's daughters, Queen Mary I and Princess Elizabeth, in her will.  She also got to keep her head and died of natural causes in 1557. 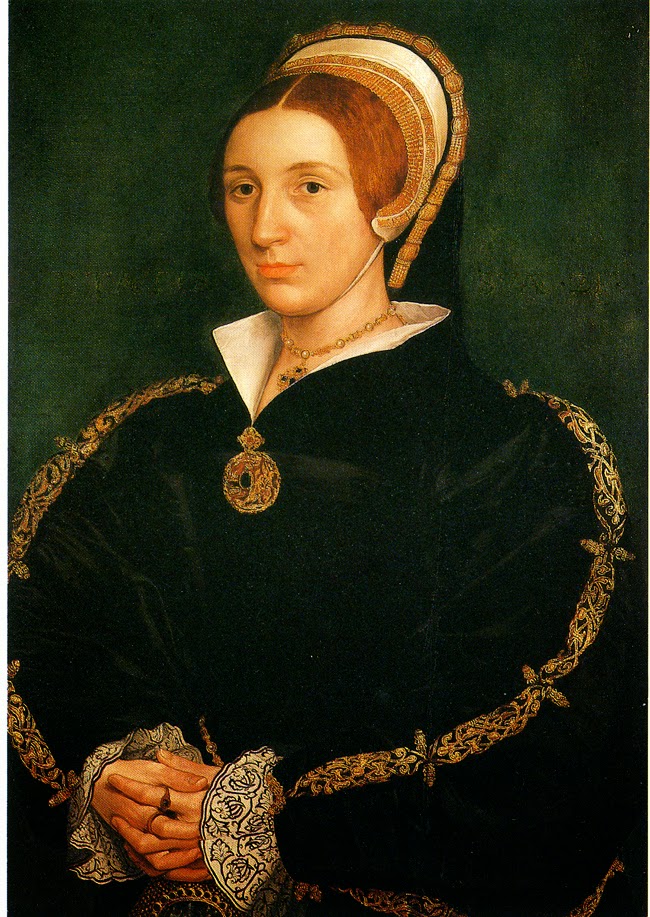 All the court jewelers made wonderful ornaments for Henry's fifth wife, Catherine Howard, but after 18 months, accused of adultery, she lost the jewelry and her head. 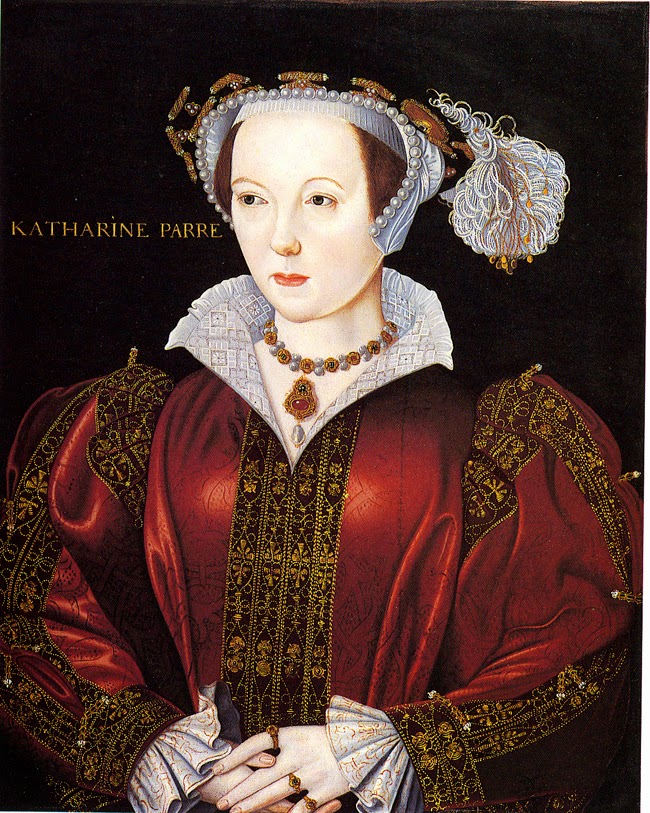 The sixth and final wife, Catherine Parr, outlived Henry but was pretty upset when Henry's son, ten-year-old Edward the VI, demanded the return of her jewelry collection to the Crown. 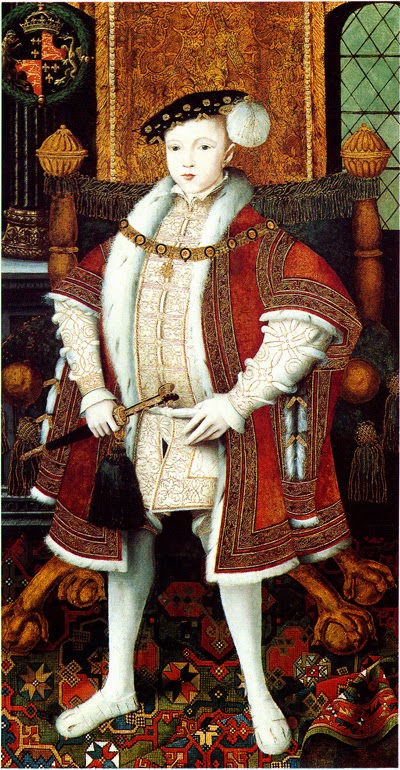 Edward's half sister, Queen Mary I, kept up the family tradition of wearing lots of jewels, though she didn't have the spare cash for purchasing more. 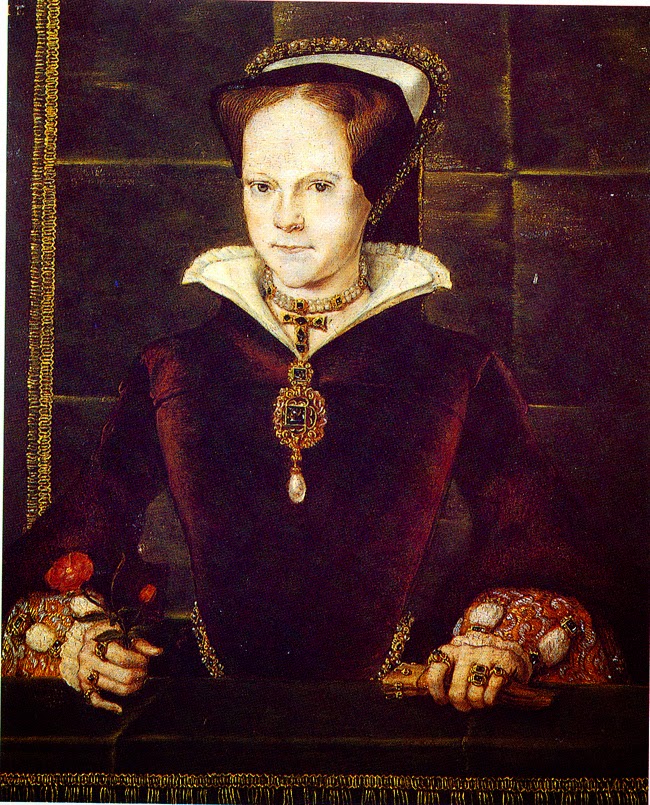 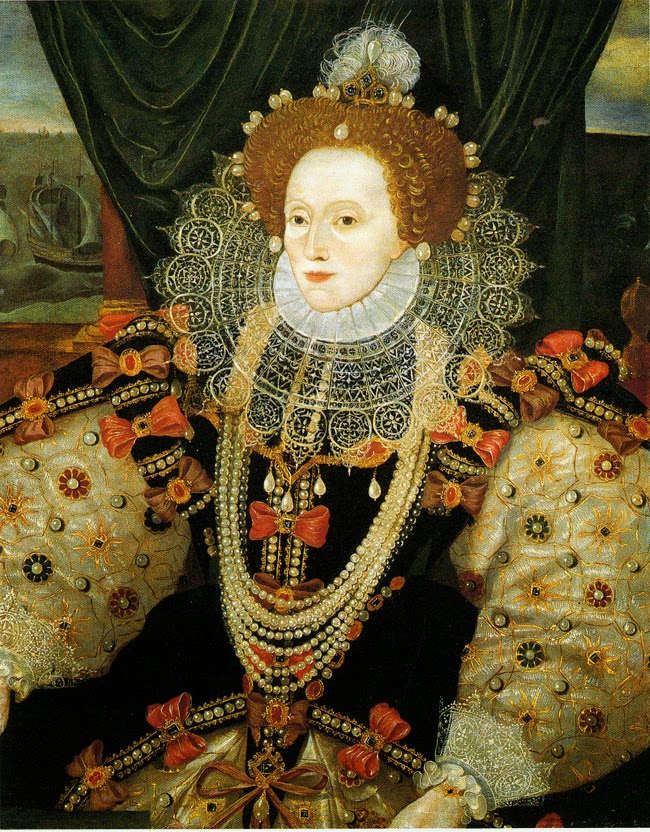 Elizabeth I, Mary's successor, wore jewels in her hair, stitched to her clothes, and ropes of pearls around her neck. She received extensive gifts of jewels from friends and admirers, but she was also rich enough to buy all the baubles she wanted and encouraged dealers from all over Europe to give her first choice of their new models. Another source of her massive horde was plunder, looted from Spanish ships returning from South America.

The acquisitions continued until Elizabeth's death in 1603 when her successor, James I, and his wife began to disperse the Tudor inheritance. Thank Goodness for Hans Holbein and other Court portrait painters. With out their art, we would have no records of jewelry from that time.
Posted by Nancy Worden at 9:09 AM No comments: