It's that time of year when the trees are budding and we are celebrating new growth.  Once upon a time I made a neckpiece that looks like an overgrown silver vine with little 14K gold ears sprouting from it.  The title of this artwork is Grafting, and for those who grew up in the Yakima Valley amongst apple orchards "grafting" refers to a method of attaching branches of different varieties to a rootstock to make a unique and healthy tree.  On one shoulder there is also something that looks like a gold walnut that is actually a small brain. The idea came to me after I read an article about how the human brain had an unlimited capacity to learn.  I envisioned a brain that could grow more ears to gain a greater capacity to listen and become a healthier mind. 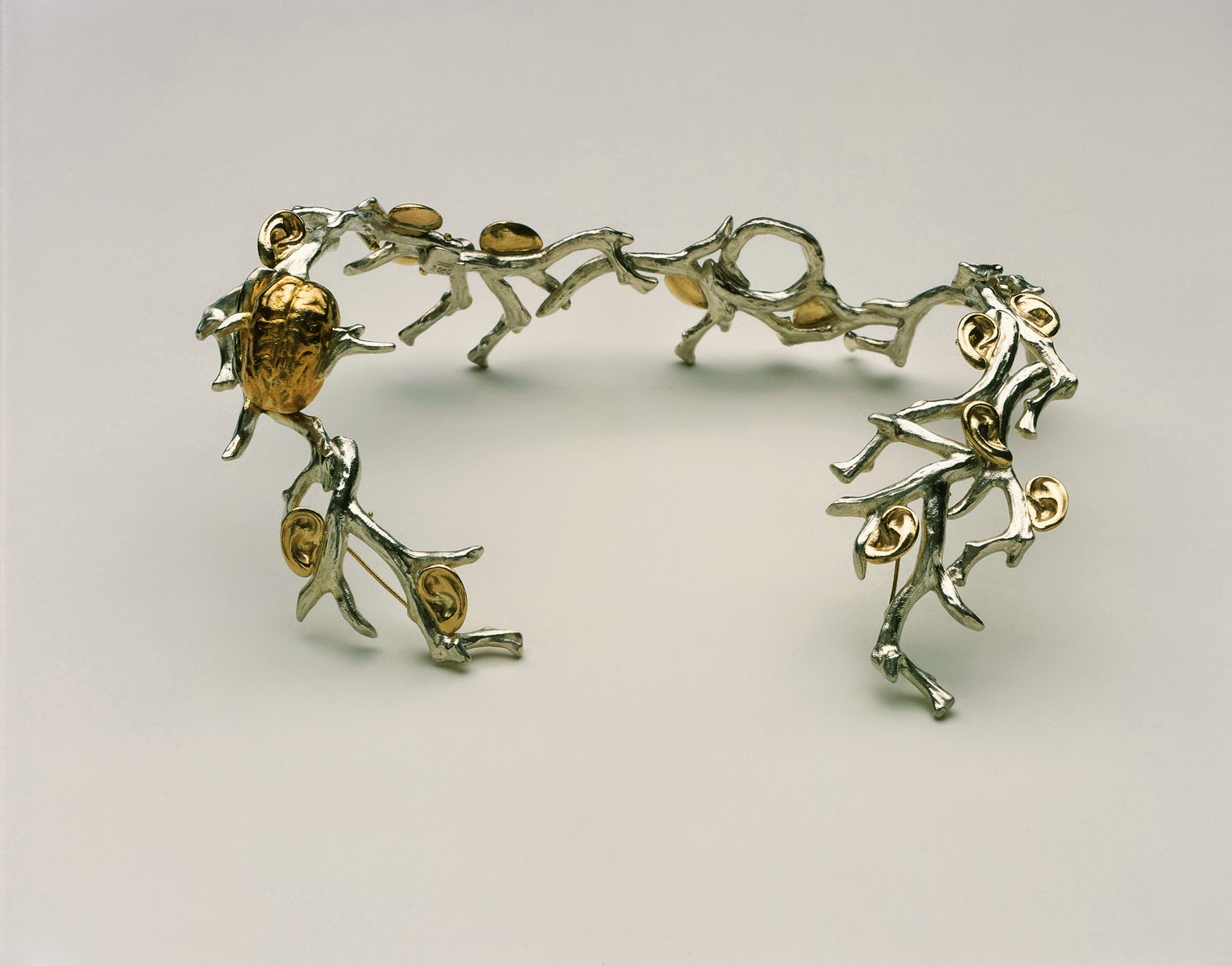 Grafting is one of several artworks I've made over the years about listening.  Listening has very little to do with hearing.  Listening implies that your brain is actually engaged in what another person is saying.  All of us from time to time are guilty of shutting out what someone is saying because we disagree with the content or the intent of what is being said.  We jump to conclusions instead of taking the time to listen and and possibly learn something new.  We just tune out and dismiss it.  I hear this in everything from movie reviews to debates about current issues on television.  The skilled debaters know how to capture our attention but the curmudgeons just keep up a negative rant.  They use their professions and affiliations as a shield against anything they don't agree with.  It is an arrogant shield assuming that only your opinion is correct and that your knowledge on the subject is complete. Liberals and conservatives are both guilty from my vantage point.

Below is an image of a necklace I made at the end of the 20th century about PTA  meetings I tried to lead where everyone talked and no one listened.  We couldn't accomplish much because there were so many people who just despised authority in any form.  People couldn't even agree about what was good for kids.  They let their egos get in the way of listening. 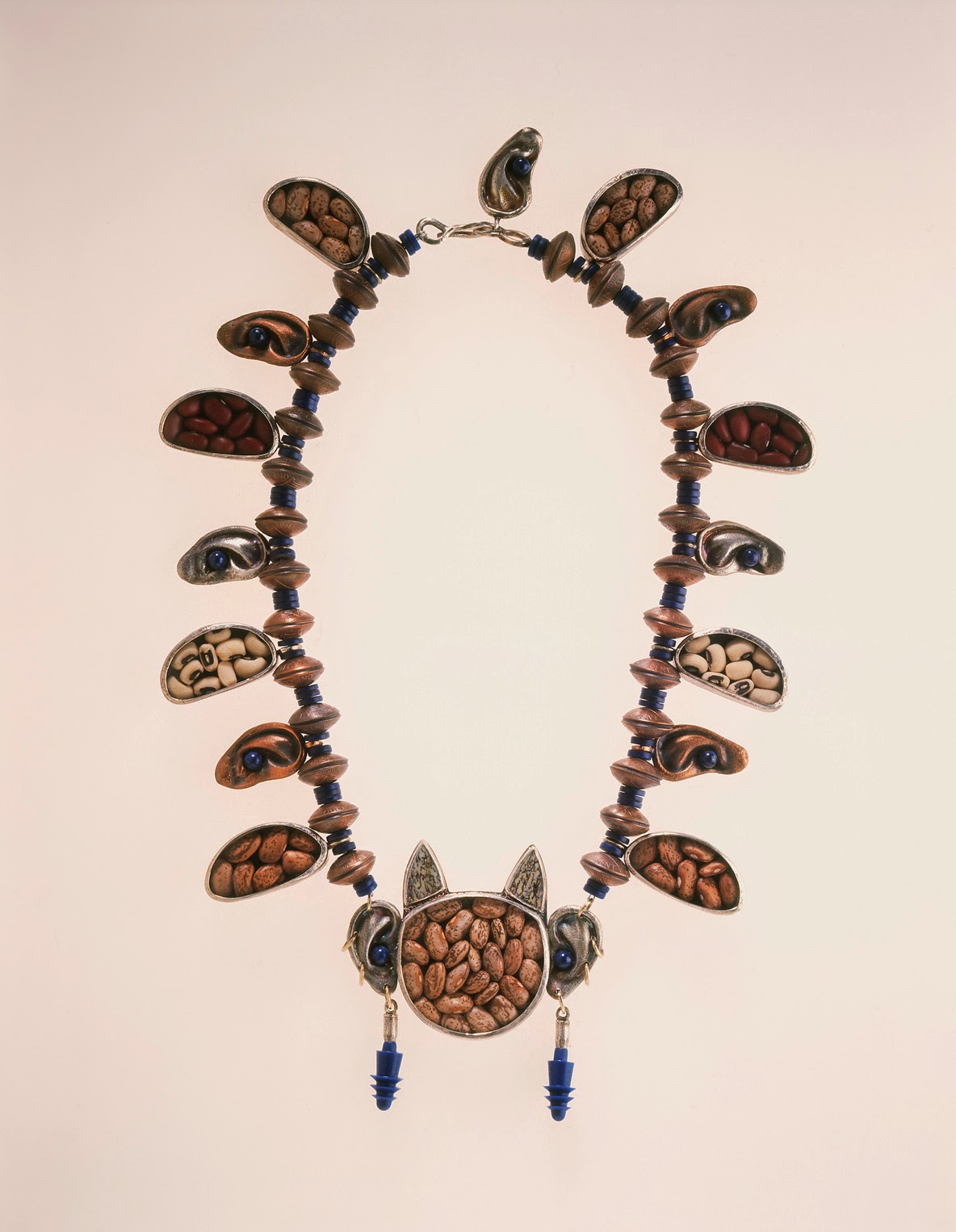 A new tactic I'm noticing is the auto-response, "I'm sorry", uttered in what appears to be sympathy.  I'm hearing this from clerks at the drugstore, hotel management, waiters in restaurants,  medical receptionists and other situations where customers used have clout.  I'm sorry has become a polite way of saying I don't care. 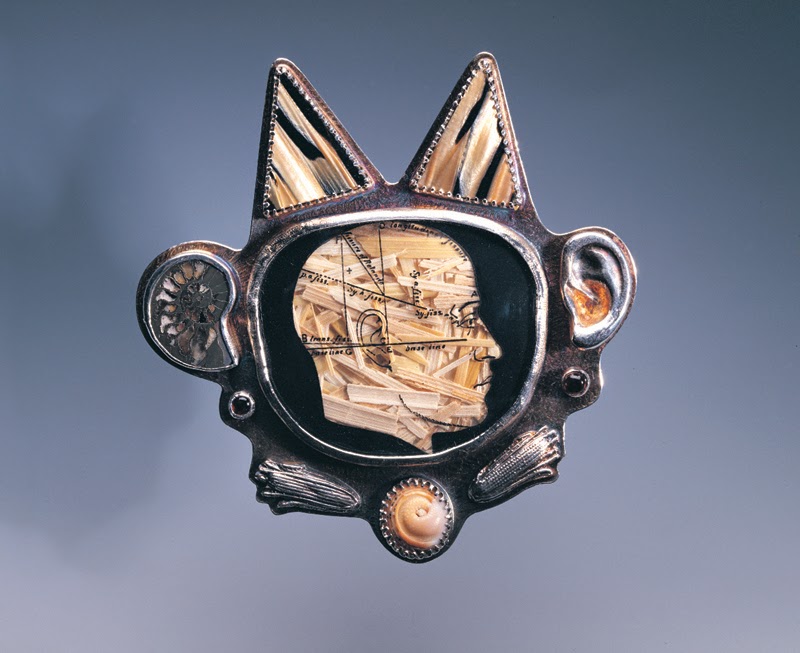 Lend Me Your Ears 1994, brooch, Collection of Museum of Fine Arts, Boston

In a recent episode of VEEP,  the bride and groom at a wedding went around collecting telephones before the ceremony because they wanted their guests  to be physically and mentally present when they were saying their vows.  People cheated with hidden second phones, which sounds fantastic but I was recently on a flight sitting next to a woman with two phones. Therefore I would like to suggest

a new national holiday, A Day Without Telephones. We could write letters or visit our neighbors in person.  I would happily give up Mother's Day for a day when people actually listened.
Posted by Nancy Worden at 3:26 PM No comments: