It may be wet and gray outside but inside at the Seattle Art Museum there is a big celebration of color going on. The current exhibition, Kehinde Wiley: A New Republic, is one of the most inspiring painting shows I've seen at SAM in a long time.  Wiley creates enormous portraits of people he finds on the street, a process he calls street casting. Once he finds an interesting person, all people of color, he invites them to come to his studio for a photo session. The male subjects choose what they want to wear and a professional photographer captures them in poses related to famous portraits the artist finds in his large art history book collection.


Napoleon Leading the Army Over the Alps, 2005 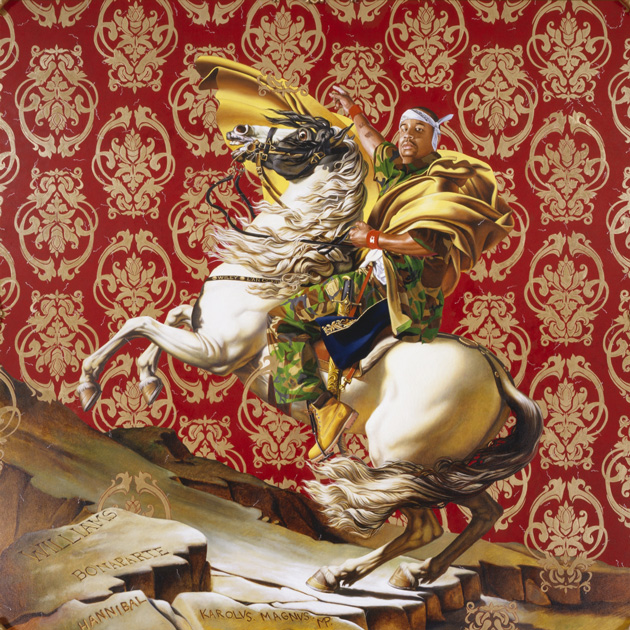 The history of painting by and large has pictured very few black and brown people, and in particular very few black men. My interest is in countering that absence.--Kehinde Wiley 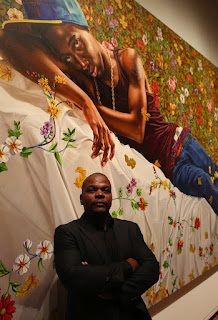 The artist with his painting, Morpheus, from 2008

To quote the exhibition guide, "Kehinde Wiley lives and works in New York and Beijing. His work posits street culture, black masculinity, and the aesthetics of hip hop as constructs that obscure the complexity and subjectivity of human identity. Wiley exposes the familiar realm of portraiture to a host of questions. He asks us to notice how a subject's gestures, pose, dress and gaze communicate identity, class, power and authority. Folded within each portrait are more complex questions about European history and ideals of beauty as well as the history and legacy of colonialism. By inverting the blackbody into the classic poses of aristocratic individuals, religious fixed figures, and men of influence from the 15th to the early 20th centuries, Wiley's works appropriate and redefine a paradigm that has historically excluded young men of color. Originally focusing on male subjects the artist recently embarked on a series of striking images of women. All of Wiley's portraits celebrate his sitters. He challenges long-held assumptions by opening new doors of perception, offering unprecedented interpretations and reimagining the black figure is subject, object, and agent." 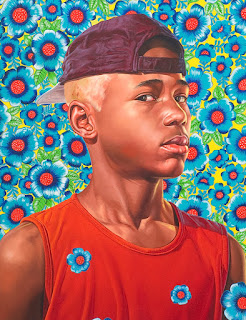 While it is obvious Wiley is trying to change our perceptions, this work can also be enjoyed on a purely aesthetic level.  I can't remember the last time I saw such beautiful, rich figure painting and then to have it superimposed on backgrounds drenched in color and alive with decorative detail is an extra treat. The sheer size of these paintings is celebratory and it puts the predictable Photoshopped images that we see on the Internet and in magazines to shame. 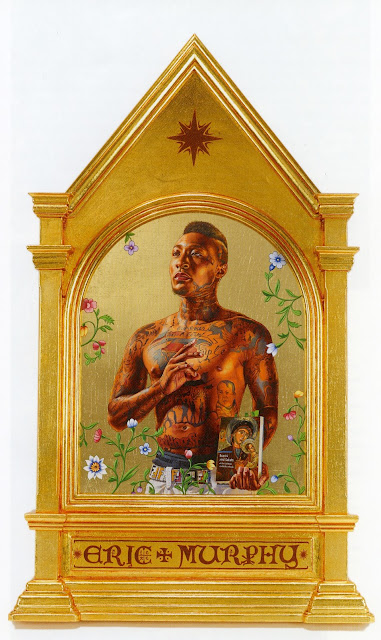 This work glows, especially one whole room containing small portraits in gold leafed frames and painted stained-glass works lit from behind.  You don't have to know anything about art history or painting to appreciate this work, it is just downright gorgeous. 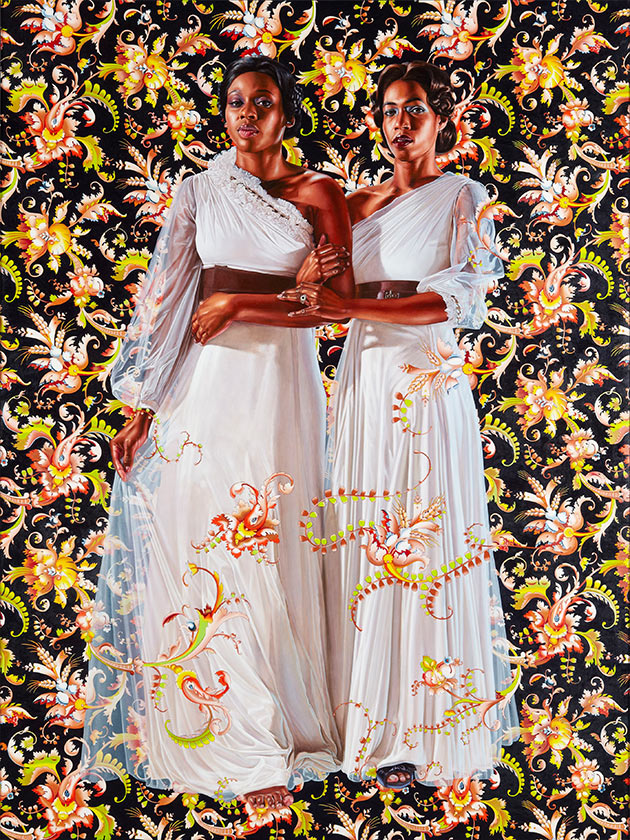 An added feature in the exhibition is the film documentary, An Economy of Grace, which follows the process from the initial street encounters to the sitters reactions at first viewing the finished paintings.  The women subjects, most of whom work menial jobs, are transformed in contemporary couture gowns and wigs prepared by one of the top hairdressers in New York.  The film also includes shots of studio assistants at his Beijing studio painting in the elaborate backgrounds.  Wiley paints the figures and sets the stage and the assistants fill in the details.  How else could he be so prolific?
I say more power to him.
Posted by Nancy Worden at 9:17 AM No comments: