Here they go again, those self-righteous do gooders who are so sure that Barbie is damaging American girls by giving them unhealthy images of themselves.  A recent article in the Seattle Times described how two parent groups are up in arms because the Girl Scouts have drafted Barbie in some of their curriculum materials for little girls. "Holding Barbie, the quintessential fashion doll, up as a role model for Girl Scouts simultaneously sexualizes young girls, idealizes an impossible body type, and undermines the Girl Scouts' vital mission to build 'girls of courage, confidence and character,'" said Susan Linn, director of the Boston-based commercial-free childhood organization."

Oh come on! My relationship with Barbie spans 50 years and I can say without a doubt that playing with Barbies did not hurt my self esteem or self image.  I also allowed my daughter to play with Barbies although she had little interest in them and as I recall mostly enjoyed throwing them out her upstairs bedroom window. 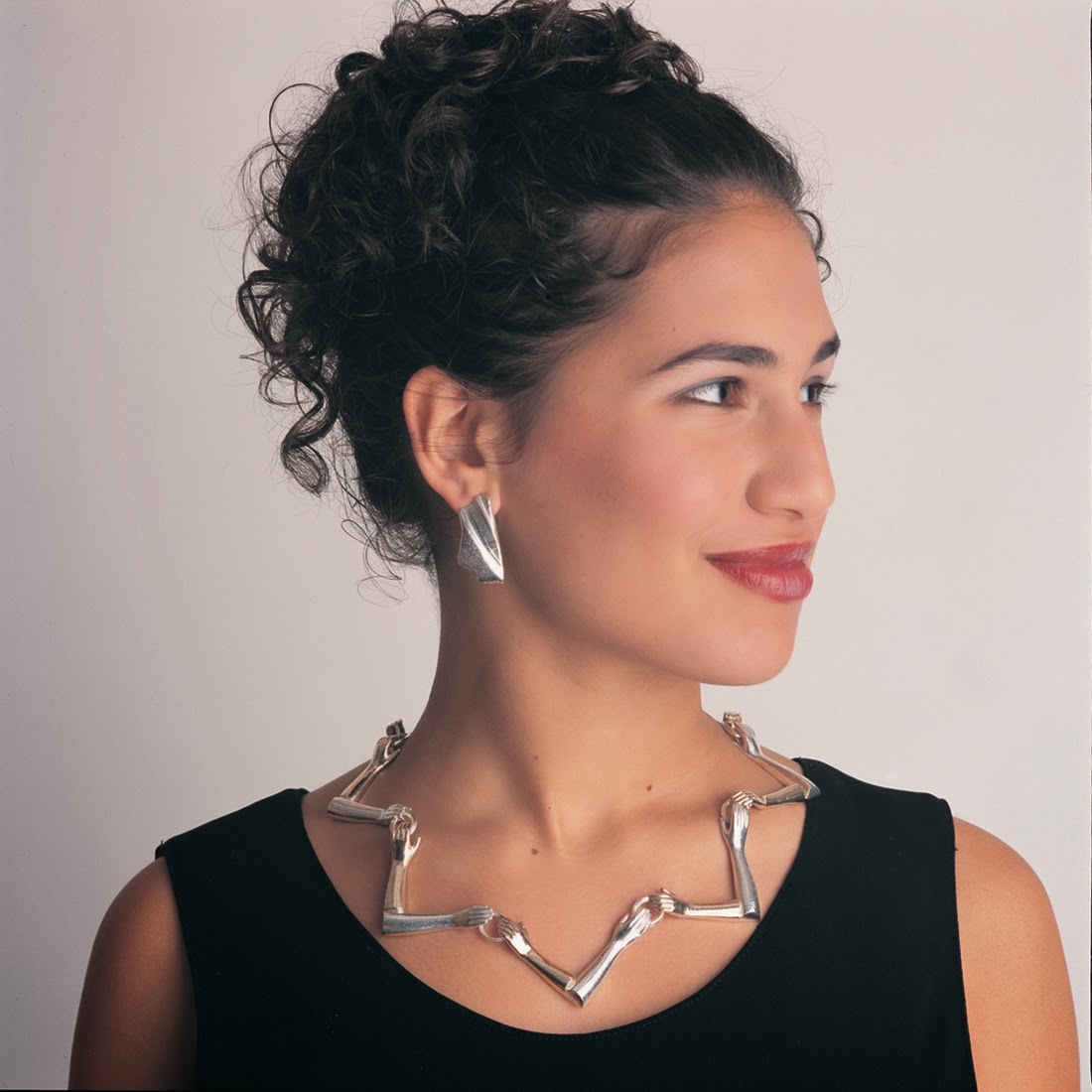 When my daughter was 3 or 4,  I started raiding her dolls for body parts for my artwork. Because I was a working mom and I didn't have much time in the studio, when I needed an arm I just made a plaster mold of one of Barbie's arms.  In the image above, my friend Sita Das is wearing a necklace I made of little arms cast in gold and silver.  The title of the necklace is Prayer Circle and it was inspired by the events of 9.1.1. This configuration is an archetypal image in dance and visual art forms in cultures throughout the world and throughout time.  Since I'm an American and I comment on American culture, Barbie arms seemed very apropos here.  It's a gorgeous necklace and I get compliments every time I wear it. 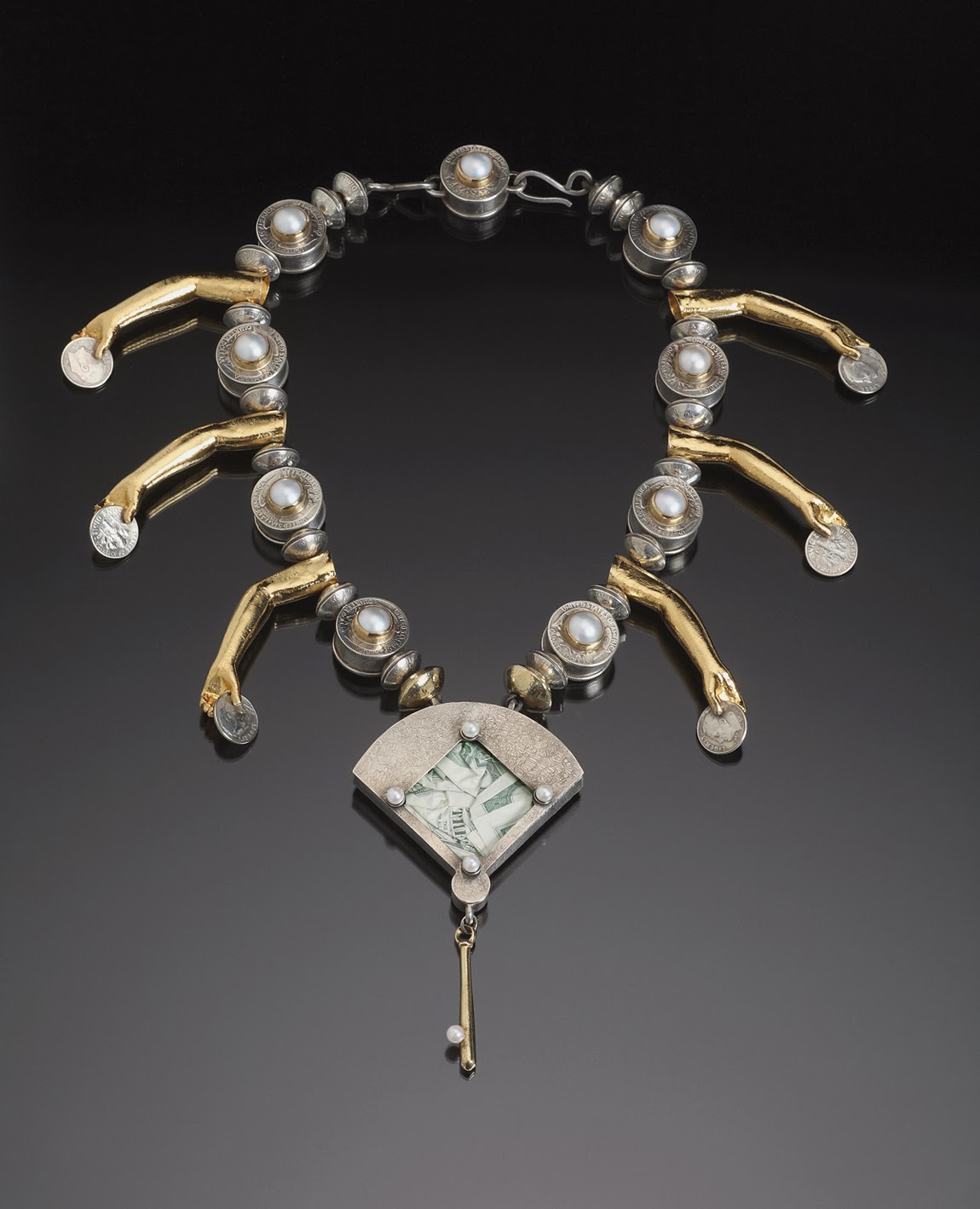 Here's a photograph of one of my favorite necklaces, entitled Diamonds and Lust.  In this situation I again used the Barbie arms mold and electro formed the gold-plated arms holding silver dimes shown above. This necklace addressed the cost of Seattle's baseball stadium, Safeco Field. In the center of the necklace is a box in the shape of a baseball diamond and it is stuffed with money. There are large mabe pearls set on beads made out of silver quarters to look like baseballs. On the backside of the necklace the beads are pierced to spell out PLAY BALL. This was intended as commentary on the ludicrous amounts of money that the team owners of the Mariners saw fit to spend on the stadium and the taxpayer money that subsidized the construction. The necklace lives in a museum in Amsterdam. 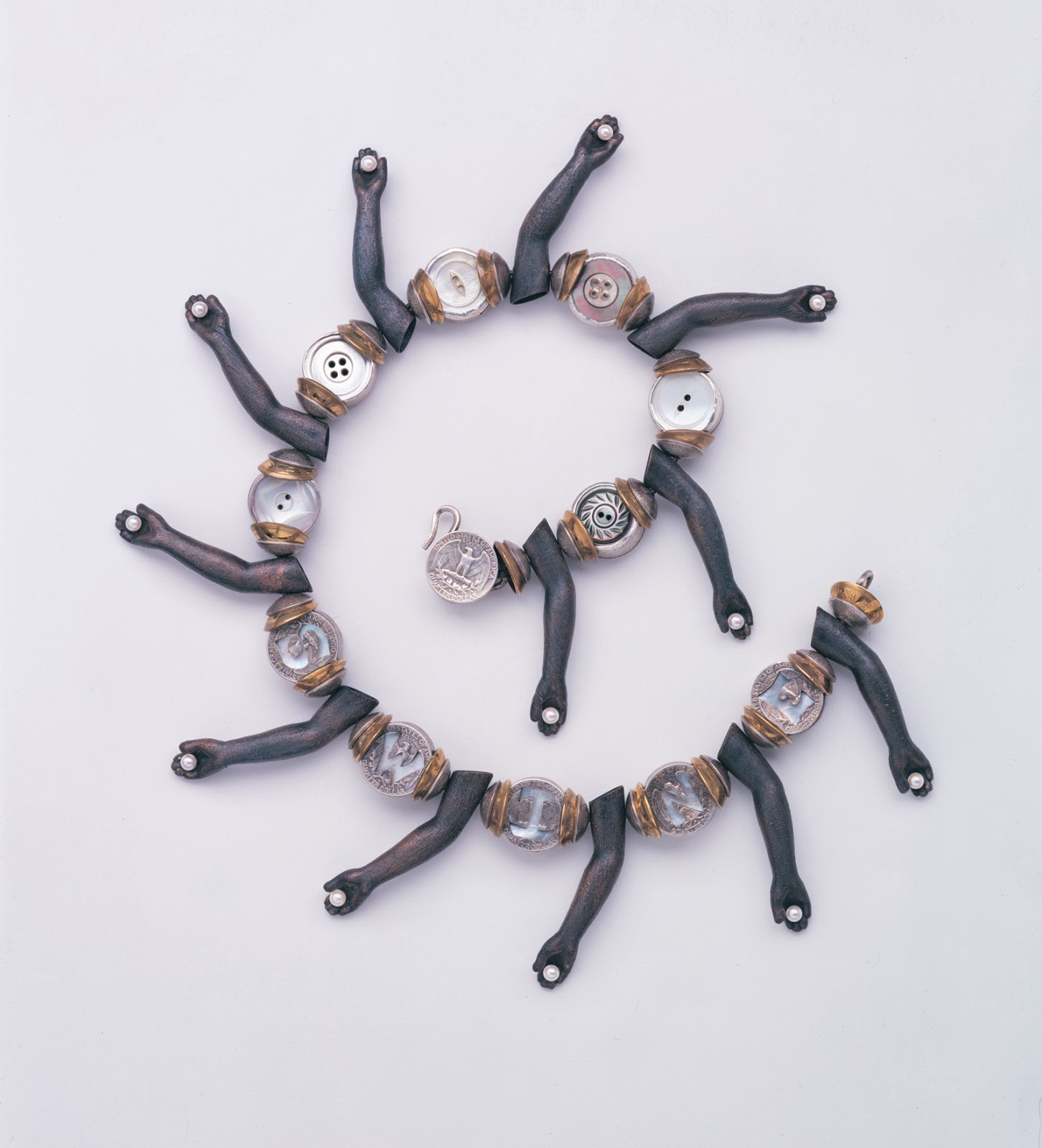 This 3rd necklace is entitled, Casting Pearls Before Swine, Barbie volunteered her arms again for this illustration of a frustrating situation I experienced while curating an exhibition.  The necklace is made of copper with little pearls set in the hands of the arms, mother-of-pearl buttons on one side of the beads, and the letters that spell out the word SWINE cut into silver quarters on the other side of the beads. This necklace graced the cover of American Craft magazine in 1999.

Mattel's Barbie has been a popular toy for 55 years. I am a former Girl Scout and I like Barbie.  I'm proud of the Girl Scouts for sticking up for their relationship with Barbie. Don't we have more pressing issues to worry about?