Lately I have been going to art museums and seeing work that either insults my intelligence or insults my aesthetic.  Okay, I acknowledge that aesthetics, the study of beauty, is culturally defined. In other words, not everyone agrees on what is beautiful. However, assuming that we still have standards within my own culture (21st century-middle-class-educated-American), what I am seeing is either a lack of understanding of beauty or a concerted effort to create something ugly.  I have made some ugly things in my time but never intentionally. I can not imagine getting up in the morning and telling myself," Let's go to the studio and make something really ugly." I start with very modest materials, often things that nobody notices but give reference my place and time on earth. Then I try to assemble something that is thoughtful and beautiful. I don't always pull it off but that's the gamble of being an artist. 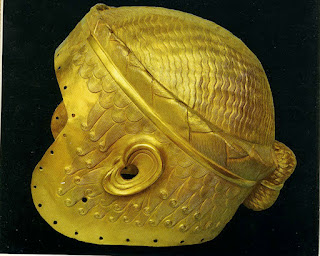 This is an image of a gold helmet from Ur dated 2700 BC.  I scanned this image from a book I bought long ago when I was an art student (during the later part of the 20th Century), Jewelry Through the Ages. This helmet has been missing since the war in Iraq when the Baghdad Museum was looted.  When I think of beauty, especially man made beauty, I often think of this helmet.  I'm pretty certain it was considered beautiful 2900 years ago when it was first made.  Thank goodness it was made of gold which doesn't deteriorate, because we at least got to photograph it before it disappeared. The point I'm trying to make is that the beauty of this object is undisputed almost 3 millennium after it was made.

I think the desire to seek and create beauty is innate in humans. Who needs beauty?  I do. By the way, if you happen to see this helmet somewhere, call the U S government. They are looking to return it to the museum.
Posted by Nancy Worden at 3:22 PM